Richard Litt scored the biggest win of his short training career with Castelvecchio in the inaugural running of the $2m Inglis Millennium (1200m) on his home track, Warwick Farm.

The Dundeel colt, with Josh Parr in the saddle, launched home from last to win by a widening two lengths. It was a stunning victory.

Punters had it pegged as a two horse race with Accession and Dawn Passage dominating betting but they had to settle for the minor placings.

“This is what we do it for, this is what we get up in the morning for, and this horse is the real deal. Unbelievable,” said Litt, who has been training for three years under his own name.

“He just does everything so easily and we never push him, today he isn’t even revved up for this. He has had two gallops coming into this so he isn’t even cherry ripe yet.”

Being an Inglis restricted race, the prizemoney from the race doesn’t count towards the Golden Slipper so Litt is already eyeing off the G1 Inglis Sires (1400m).

“We wont push him and rush him to the Slipper, we’ll just take our time and see where he takes us,” he said.

The 29-year-old, who spent time under Graeme Rogerson, John O’Shea, Bart Cummings and his father Jim, concurred that the win could be life changing, cheekily suggesting that he might be able to buy a few more horses at the Inglis sales tonight.

“They say ignorance is bliss and that’s certainly the case with this horse, he is so raw. He has no idea what this is all about,” gushed Parr.

“It’s all just sheer ability, you saw how hard I had to urge him into the race from the 600m point  and made my job quite difficult but his turn of foot after being asked for a run so far from home, was extraordinary.” 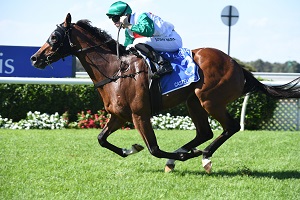 Accession was brave in defeat, after jumping quickly Hugh Bowman had to take hold before they pair were swept wide on the turn.

“I thought his run was every bit as good as the winner,” quipped Bowman.

Meanwhile, Blake Shinn also pointed to the Inglis Sires as a perfect option for Dawn Passage.

“He ran super and hit the line really well, just had a traffic problem throughout the race but that’s due to his racing style of getting back in the ruck,” said Shinn.

“I think he’d be more a Sires type of horse but there is no reason to suggest he can’t push onto the Slipper lead ups and if he can get into a Slipper he would definitely make his presence felt. He is an exciting horse.”