Champion jockey Glen Boss, the foremost authority on how to win the Group 1 $3m The Star Doncaster Mile (1600m), has been waiting since the early spring to win the Randwick feature mile on under-rated galloper Think It Over. 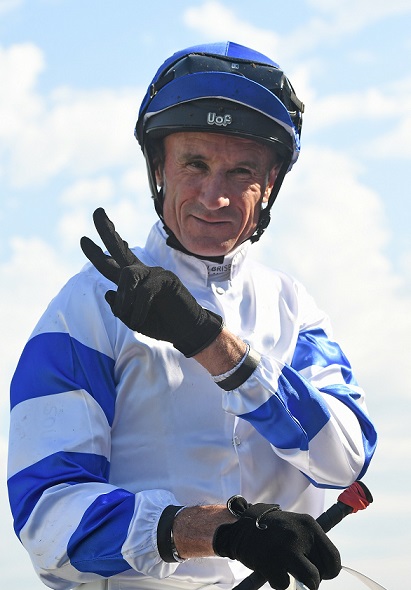 Glen Boss chases his 8th Doncaster Mile on Think It Over at Randwick on Saturday (Pic: Steve Hart).

Kerry Parker’s five-year-old has appeared to be punching above his weight all season but Boss said he’s been a project horse and having beaten the handicapper with just 52.5kg he’s excited about his chances on Saturday.

Boss has won a record seven Doncasters, the latest on Brutal in 2019, and has had his eye on an eighth with Think It Over since he rode the gelding to a second in a Benchmark 88 back in August.

“Kerry and I have had a little plan and it’s been 12 months in the making,’’ Boss said.

“That’s why I stuck with this horse all the way, I didn’t want to ever get off him. Unfortunately I didn’t ride him couple of times in the spring, like the Gong, because I was in Melbourne but I wanted to make sure I rode him every time he started.”

Think It Over raced his way into open company in the spring, winning the Group 3 Craven Plate (2000m) on TAB Everest Day and finishing a gallant third in the $1m The Gong on his home track of Kembla Grange.

But this autumn the “penny has dropped” and he arrived in a Doncaster Mile with a 113 rating, the second highest in the race behind Mugatoo (114) and he’ll be in receipt of 3.5kg from the top weight who is yet to win at Group 1 level.

Think It Over ticked that box by claiming the George Ryder Stakes (1500m) at Rosehill two weeks ago.

“Every time we went to the races I was trying to get him to do things a bit better,’’ Boss said.

“He was very nervous and unsure about what he’s doing so I was trying to educate him. I said to Kerry ‘I reckon you’ve got a really good horse here but he has no idea he’s good yet’.

“We had to give him the confidence to go out there and do the job. All of a sudden, bang, the penny dropped and it’s been this prep.

“He was very good first-up, traditionally his second-up run isn’t very good and he still ran well behind I Am Superman, then came out and backed it up again in the Ryder.”

Winx is the last George Ryder winner to take out the Doncaster, that was in 2016 and Happy Clapper (2018) and Brutal (2019) came off seconds behind the champ in their respective years, and Boss said time and time again the horse that beats the handicapper is in the finish.

As the jockey alluded he won the Group 3 Liverpool City Cup (1300m) first-up, where he attracted a 0.5kg penalty, chased home I Am Superman in the Group 2 Ajax Stakes (1500m) and ran down Dreamforce to win the Ryder.

“If anyone can find me better form show me, because I can’t find it,” Boss said.

“If he was trained by one of the leading stables in Sydney he’d be vying for favoritism. He wouldn’t be starting the odds he’s been starting, he’s in terrific form.

“Whether it’s luck or good management I’ve been able to find these horses that are going quickly up the ratings but are going down in weight. There’s no better form. He’s coming out of what is always the best form race.”

When Think It Over, $9.50 with TAB on Wednesday, drew barrier 18 in the Doncaster his jockey didn’t blink. He doesn’t care what barrier he’ll jump from because he’s done it from basically everywhere in the barrier stalls.

“It’s never bothered me. You’ve just got to ride your horse to his or her best ability,’’ Boss said.

“I have got the luxury of the light weight. He’s won on the inside, he’s a big free striding horse and can sit anywhere and win. I just don’t want a heavy track because he’s no good on it.

“He’s a horse that can run a really strong 2000m and I don’t think there are many horses in the race that can win.”

As adamant as Boss is that Think It Over can win the Doncaster he’s as bullish in his view that a three-year-old won’t defeat the older horses in 2021.

“I don’t think the three-year-olds aren’t good enough, I’ve been saying it all year,” he said.

“I won on Brutal with 49.5kg and he came off an amazing run behind Winx in the George Ryder, none of these three year-olds could have done that and he only won by half a length.

“Mugatoo can win, Avilius can win, Cascadian can run really well, and I wouldn’t forget Funstar. I think it will come from the older horses, I just don’t think the three-year-old form is good enough.”