Kelley, however, is far from a stranger to the racing game. 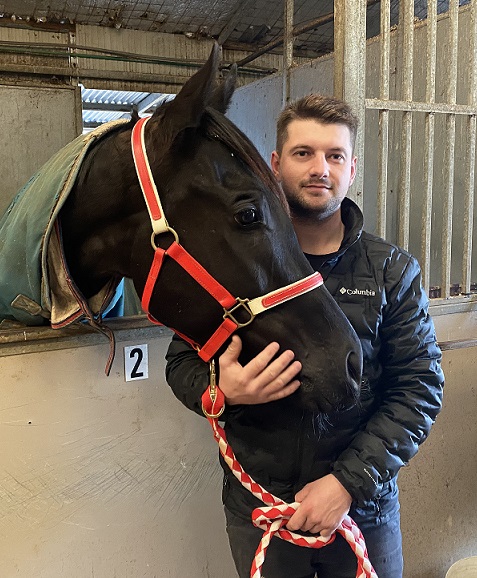 The 25-year-old recalls his father David always having a couple of horses in work when he was growing up in Cooma, being involved in activities like pony club and rodeos, before giving up the tools and making the decision three years go to head to Canberra and chase his training dream.

“We always trained one or two as a hobby, we’ve always had horses in work mainly owned by ourselves,’’ Kelley said.

“Even when I was at school before I was a chippy we had horses in work. I was getting over throwing the hammer around and made the move to Canberra to see if we could get some traction.”

After riding work for various trainers in Canberra for a while David Kelley opened a satellite stable there and Matt acted as foreman before taking out his own license a few months ago.

I’ve Bean Tryin’ started his career with David and Matt but went shinsore as a two-year-old and when he returned part-owner Stephen Johnson took over the training for his first racing preparation.

When the gelding resumed in May he was back under the Kelley name and on June 14 he provided Matt, who has 10 horses in work, with his first runner and first winner as he scored a runaway win on a heavy track at Wagga.

He didn’t have to wait too long for his second winner when Super View scored at Canberra 10 days later.

“It’s pretty good to have a little horse like (I’ve Bean Tryin’) in your stable so early in your career,’’ Kelley said.

“I hope I do the right thing by the owners. He makes my job a bit easier than what it appears, he’s above average.

With three wins from six starts heading into a TAB Highway (1400m) is a logical step and Kelley said he will arrive at Randwick confident, if a little nervous, about securing his maiden city win.

I’ve Bean Tryin’, $3.80 with TAB on Thursday, has been to Randwick once before and finished a handy fifth in a Class 2 Highway in December after racing off the course throughout.

“He’s a Class 3 horse, you look for that shot at a TAB Highway and it all matched up really well,’’ he said.

“He’s not very big, very lightly framed, so you don’t want to run him too much and knock that condition off him.

“This is his toughest test. His Highway last prep was a Class 2 but I definitely think he is up to the mark. His work during the week was first class so I think he is up for a good showing.”

Kelley is using apprentice Ellen Hennessy’s 3kg claim to give the gelding a 5.5kg weight drop on his Wagga win and a heavy track certainly doesn’t concern him and an inside barrier gives him options.

“He gets through it really well,’’ he said.

“He always gave me the impression when we worked him at Canberra on the course proper when it has a bit of soup in it he glides through it.

“He’s pretty versatile. He could box seat or he could drop back to three or four pairs back on the fence and still rocket home.

“He’s got that good turn of foot that good horses have and he can run home from anywhere.”

If the three-year-old is as talented as Kelley believes the logical target would be the 2023 Country Championships series but he’s keeping an open mind until Saturday’s result is known.

“You don’t want to jump over the bridge before you get there but if he could win on Saturday nicely who’s to say he wouldn’t be half a chance in a Kosciuszko,’’ he said.