Local trainer Cody Morgan is the proverbial ‘kid in a lolly shop’ as he prepares his large team for Friday’s huge Tamworth Cup Showcase meeting on home soil.

Morgan will have multiple runners in at least six of the eight races on a program that is offering more than $500,000 in prizemoney. 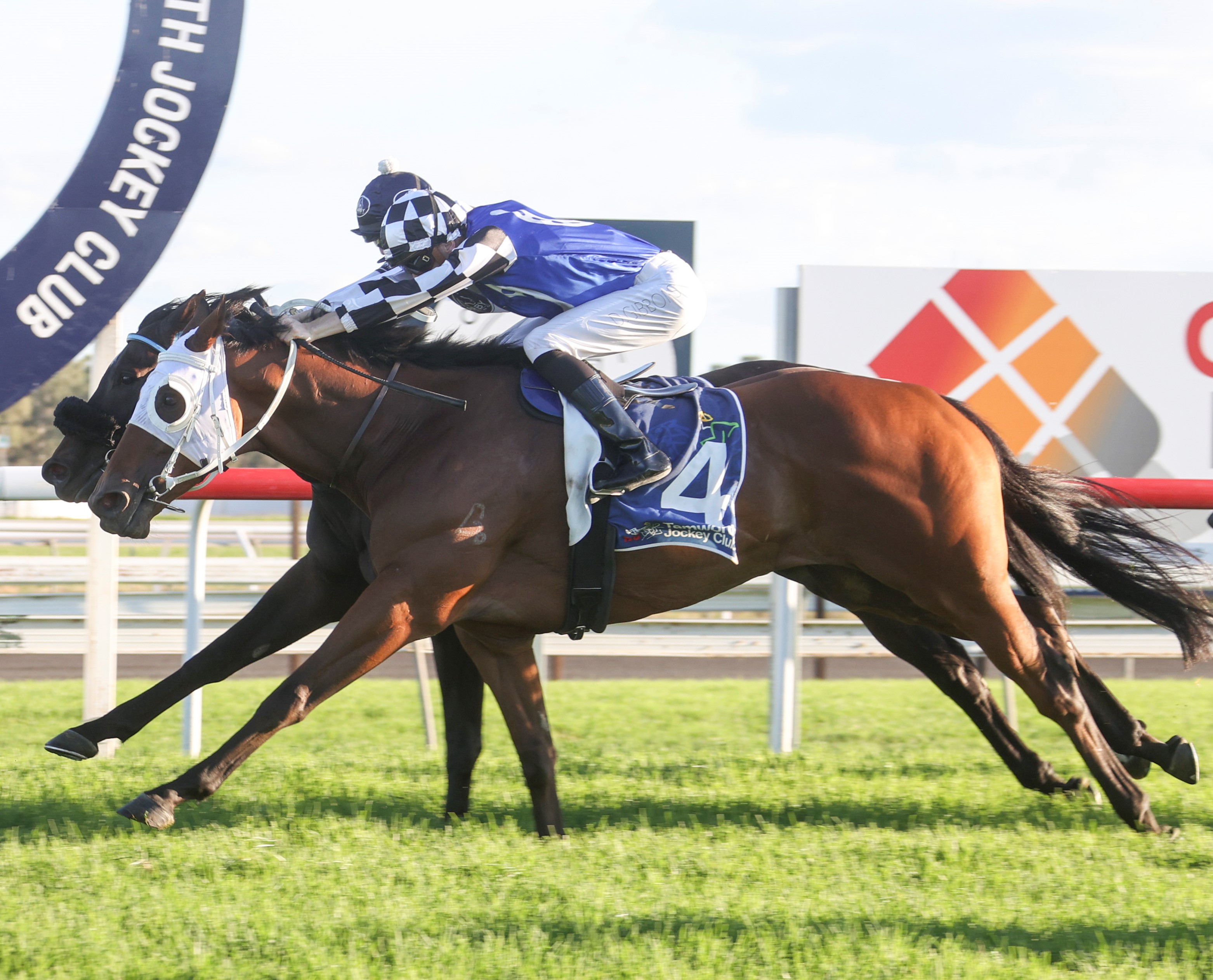 Acrophobic (Dylan Gibbons; no.4) gets up in the final bound to win the Tamworth Cup Prelude. Image by Bradley Photographers

And Morgan believes he could have five or six runners in the feature event, the $200,000 Tamworth City Toyota Tamworth Cup (1400m).

Morgan’s entries will be headed by Acrophobic who impressively won the Tamworth Cup Prelude, circling the field near the home turn and steaming home to grab a narrow victory.

“He’s flying. The horse has been plagued by feet issues but he’s a happy and healthy horse at the moment,” Morgan observed.

“The key is to keep him fresh. He came from the city and has only had three runs for us.

“He’s a high-grade horse, having finished fourth in the [Listed] South Pacific Classic at Randwick behind Ellsberg and Private Eye.”

“Wren’s Day finished second last year and has been trialling well in preparation for the Cup,” Morgan said. “Casino Seventeen was placed in a Listed race when second in the Adelaide Guineas (1600m).”

The horse has only had one run for Morgan when a fast-finishing third at Muswellbrook over 1280m.

“Kordia [formerly with James Cummings] had good form in Sydney and has been going well with two trials for us.”

And finally, Mahis Angel, who is a former South Australian horse with six wins to his name including wins at Caulfield and Moonee Valley.

His first run for Cody Morgan stable was an eye-catching fifth (beaten less than two lengths) in the Tamworth Cup Prelude after coming from last on the bend.

“It was a big effort coming from well back and if he draws better, he just about wins that race,” Morgan said.

“He’ll be in the entries, but it will be a hot race and he may not get into the field. If he doesn’t, we’ll be taking him straight to Sydney.

“We haven’t sorted out jockeys yet, but Willie Pike will be coming up to ride one of them.”

Morgan’s speedy Giftgiver, who was well-backed when fourth at Tamworth on Prelude Day, will run in the $50,000 John Clift Memorial (1000m).

Tamworth Jockey Club’s GM, Michael Buckley said: “In an exciting first, the Tamworth Cup coincides with Tamworth Country Music Festival which was postponed due to COVID in January this year.

“We’re encouraging everyone to pack their car or book a flight to Tamworth to see the region come alive.

“And we should see many Metropolitan and Provincial trainers targeting our Cup Day. It’s good for the competition with local trainers happy to be racing in their own backyard for big prizemoney.

“Already trainers are speculating that the Tamworth Cup will fit the eligibility criteria for the $2 million The Big Dance at Randwick on Melbourne Cup Day.”

Ticketing and packages are now available on the TJC website – tamworthjockeyclub.com.au