Kody Nestor is taking a ‘see what happens’ approach to his surprise return to the jockey ranks.

After walking away from his powerful Dubbo stable almost six months ago, the 31-year-old hung up the ‘Gone Fishin’ sign and took a break from racing to reinvigorate the mind and the body. 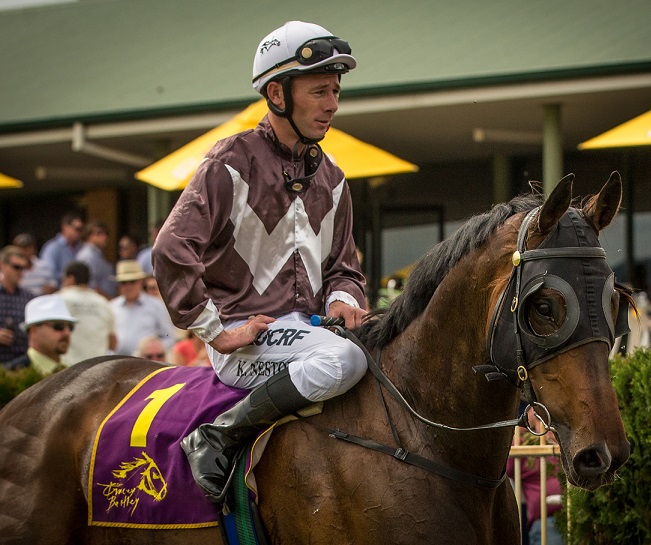 Kody Nestor, on board his last winner as a jockey Noel’s Gift in 2017, is making a comeback to the saddle at Dubbo on Sunday. (Pic: Janian McMillan)

In that time he’s lost 16kg and while there was no intention to resurface as a jockey so quickly he says the lifestyle he’s found living around the Central and Mid North Coast area is agreeing with him and he’s keen to ‘give it a crack for a year or two’.

“The first three or four months I spent most of my time fishing and living on the beach,’’ Nestor said.

“I feel good. I enjoy jogging along the beach and going to the gym. I’m really looking forward to seeing what happens.

“There’s no pressure. I go in to ride a few work and you knock off by 7 or 8am and you’re done for the day, it’s a pretty good lifestyle.

“You can duck up to Newcastle, Port Macquarie, Taree and it’s not far to Muswellbrook and Scone.”

It’s been four and a half years since Nestor last rode in a race, battles with weight and injury got the better of him, but that drought will be broken at Dubbo on Sunday – the same track his riding career ended on November 7 in 2017.

His last winner was on the same day, Noel’s Gift for Gayna Williams.

But he’s keen to make the comeback as low key as possible – that’s why he chose Dubbo – because while you can do all the trackwork and trials you want he’s, to be frank, a bit rusty when it comes to race riding.

“I’m slowly bringing the weight down and seeing what I can do,’’ Nestor said.

“I thought I might as well jump back into the saddle and punch a few heavy ones around.

“I’m enjoying it at the moment. I’m not going to get down to the weights I used to so I might be able to live a bit better lifestyle and not hammer myself.”

He has three rides at Dubbo on Sunday – Barry The Poet for Brett Thompson in the Omni Building Group Handicap (1300m), Mishani Vandal for Cindy Monaghan in the Marty Nelson Refrigeration & Air Conditioning Plate (1000m) and Achi Baba for Grant Marshall in the Ronald McDonald House Charity Handicap (1200m).

Each of his rides has 58.5kg or more and is $26 or longer so there’s certainly going to be no expectation on Nestor to get them home. If he does it’ll be a bonus.

“I’ll get a good look at where the runs will be, it’s whether I’m good enough to get into them,’’ he said.

“I didn’t want to start off riding a $1.70 shot, where there’ll be a lot of pressure. It’s going to take me a little while to get my eye, timing and balance back in.

“I’ve been out of the game for so long it could take me a good two, three, four weeks before I get my timing.”

Nestor is the only person to ride and train a winner in the Country Championships series, having won the inaugural Western Districts race on Dane De Lago as a jockey in 2015, and also rode him in the Final, and trained both Sneak Preview and Activation to win the race in 2020 and 2021.

As for why he closed his stable he said he felt the pressure of training a big team, plus dealing with some personal issues, and was something of a victim of his own charter to strive for excellence and results.

In hindsight, he says he took on training too quickly after his riding career finished and while he achieved a lot in over three years the job wore him down.

“Training for me was all about getting a better quality horse in the bush but every time I got one you were forever on the road travelling to race meetings,’’ he said.

“We had a pretty big team at Dubbo. We were doing a lot of travelling. It was enjoyable, I loved the training, but I was starting to get to the point where I was wearing out.

“When I finished riding last time I went straight into training and didn’t have that break away, looking back I would have given myself six to 12 months off.

“I’d had a couple of bad falls and I think this time around my body has had a fairly lengthy break. As I started dieting it’s been coming off quite naturally.”

It’s almost certain Nestor’s riding comeback will be a temporary one. He still has the desire to train, just not right now.

“This is something I’m going to do in between, I’m not ready to go back to the full time schedule of training,’’ he said.